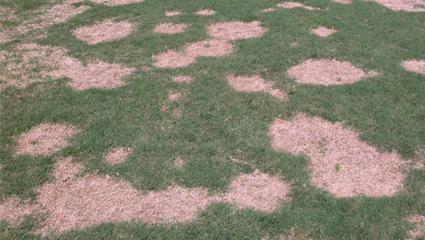 Spring dead spot symptoms appear in circular patches from 6 inches to several feet in diameter that remain dormant as the turf greens up in the spring. These patches eventually die and collapse to the soil surface. The roots, stolons, and rhizomes are dark and rotten in affected areas. Spring dead spot patches recur in the same spot each year and increase in size by up to several inches each season. As the patches expand, the centers are sometimes re-established with bermudagrass or weedy species, resulting in a ring-like appearance. Recovery of the patches occurs by spread of the turf from the outside. This process is very slow, taking the entire growing season in severe situations. The spring dead spot patches greatly detract from the uniformity of the playing surface and are frequently invaded by weeds.

Although spring dead spot is most evident on intensely managed turf, such as athletic fields and golf courses, it does occur in home lawns. The disease typically takes 3 to 5 years to become established in a new bermudagrass stand. Unlike take-all patch, spring dead spot does not decline in severity as the turf matures. It becomes more severe if left unmanaged.

The spring dead spot fungus attacks the roots, rhizomes, and stolons during the fall and winter. This activity does not directly kill the plant, but instead makes the turf more susceptible to freezing injury. As a result, spring dead spot is most severe in the northern range of bermudagrass adaptation and is usually more severe after extremely cold winters.

Any factor that restricts root growth or increases its susceptibility to winter injury will also enhance the disease. Excessive nitrogen, potassium deficiencies, poor soil drainage, over-irrigation, excessive thatch accumulation, and soil compaction have been shown to encourage disease development. The impact of soil pH on spring dead spot development is not well understood.

Fertilize to meet the nutritional needs of the turf, but do not apply excessive rates of nitrogen. Do not apply nitrogen within 6 weeks of winter dormancy, and do not exceed more than 1 pound of nitrogen per 1,000 square feet per application at any time during the growing season. Reduce thatch buildup and relieve soil compaction through aggressive aerification and vertical mowing. Areas that are severely affected by spring dead spot should be hollow-tine aerified at least three times per year, during the summer when bermudagrass is most actively growing.

The impact of soil pH on spring dead spot development is unclear at this time. Past recommendations focused on the use of acidifying nitrogen sources like ammonium sulfate to manage this disease. However, recent research at NC State University has shown that different spring dead spot pathogens respond differently to nitrogen sources. Ophiosphaerella korrae, the most common pathogen in the eastern United States was controlled effectively by application of calcium nitrate as the sole nitrogen source. On the other hand, O. herpotricha, the most common pathogen in Midwestern states, was suppressed by ammonium sulfate. Fall applications of potassium, which have been frequently recommended for spring dead spot management, had no effect on the disease in our research.

Once the symptoms of spring dead spot appear, the only means of control is to encourage the spread of the turfgrass back into the affected patches. Frequent spiking or aerification is recommended to break up the mat of dead turf in affected patches. Dinitroaniline (DNA) herbicides, which are commonly used for preemergent control of annual grasses, can slow the recovery from spring dead spot injury and should not be used in sites with a history of the disease.

Fungicides are available for spring dead spot control, but they must be applied preventatively in the fall. Applications are most effective when soil temperatures are between 60 to 80°F (16 to 27°C). To move the fungicide into the root zone, apply in a high volume of water (5 gallons per 1,000 square feet) or water in with at least 1/8” of irrigation immediately after application. Repeat applications at high label rates may be necessary in severely affected areas. Affected areas should be mapped in the spring for treatment in the fall to reduce fungicide expenditures. 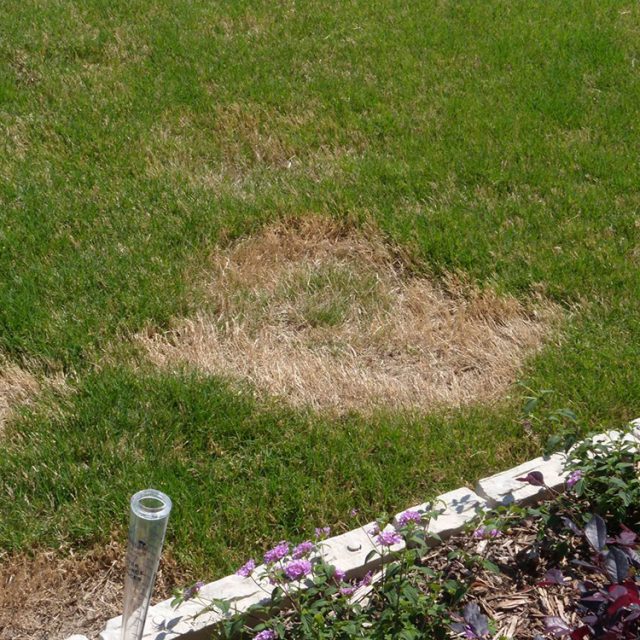 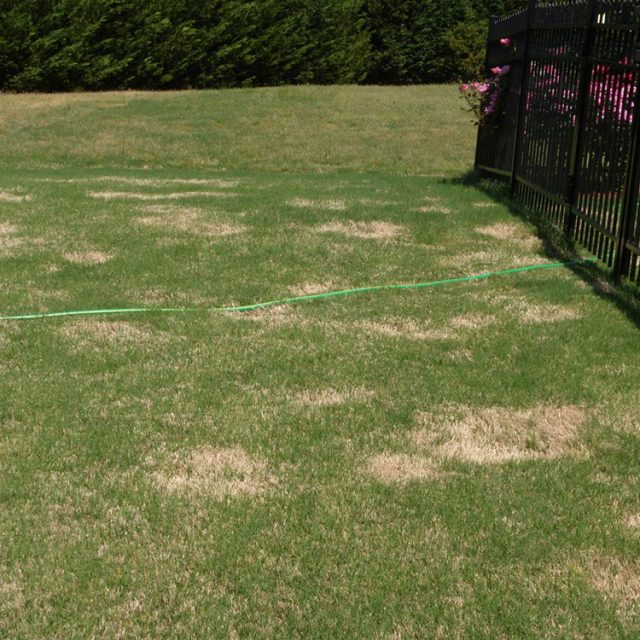 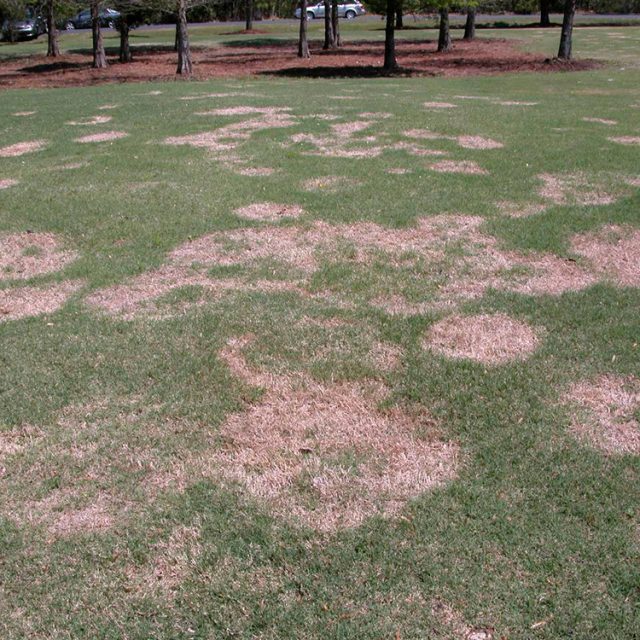 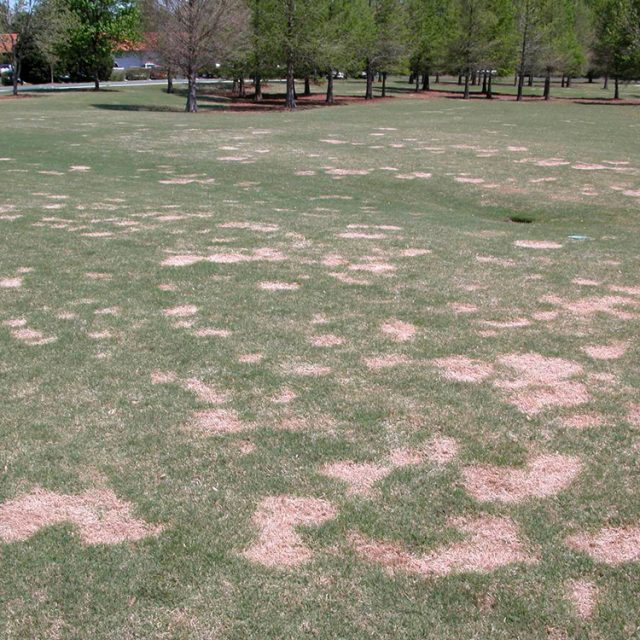 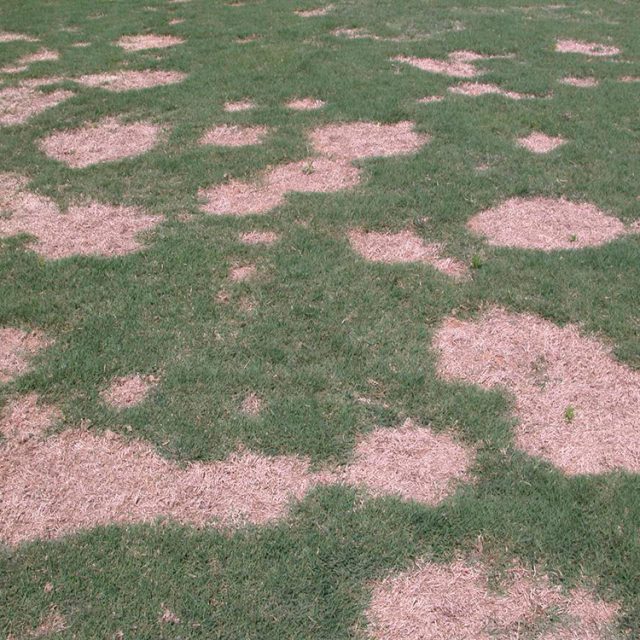 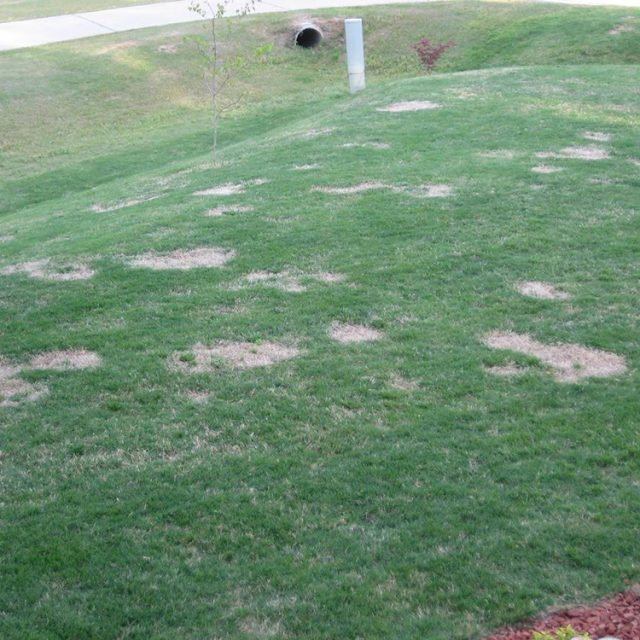